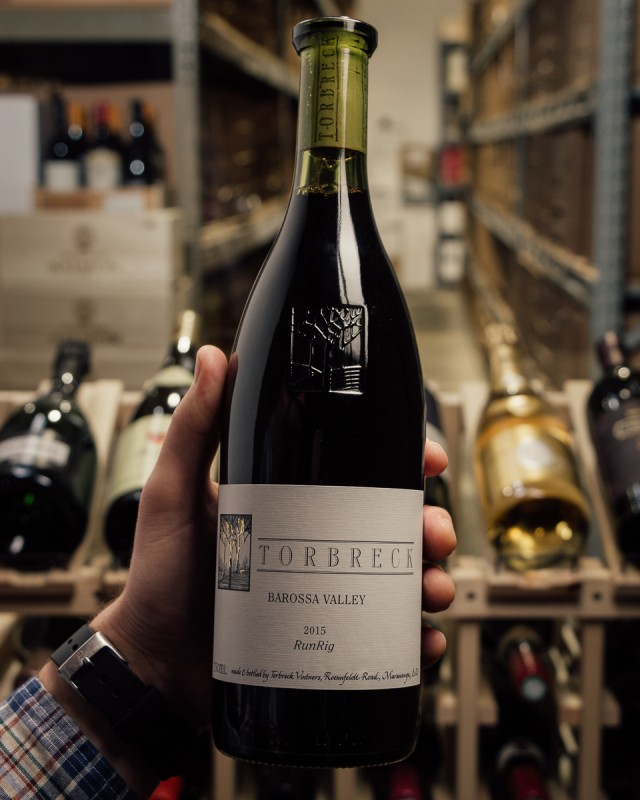 A full-on rip-roaring blockbuster classic. 98 points!! Run Rig ROCKS every year (it is hard to count up all the 95-100 point scores...) and they somehow manange to make a HUGE wine that is seamless and balanced feeling. Wow. A true epiphany wine!

Torbreck is on a quest to become one of the world’s great wine marques. A critical part of this journey is remaining unwaveringly true to our core vision and not being diverted by trends and fashions.
Provenance is everything to us. We believe the Barossa is the most exciting place to make wine in the world, with its gentle Mediterranean climate and 175 years of Silesian and English commitment to winemaking and grape-growing.
There is a European sense of tradition here that means vines planted in the 1840s – many of them Rhone varieties such as Shiraz, Grenache, Mourvedre – still thrive and bear fruit of unique concentration and flavor. Torbreck pays tribute to these vineyards with minimal intervention, creating wines of richness, structure and length that age gracefully.

Robert Parker's The Wine Advocate
Who would`ve thought that in the context of Barossa Shiraz, the 2015 RunRig would seem like a relative bargain? It`s certainly much less expensive than Grange or Hill of Grace will be when they`re released. It`s also more approachable in its youth, with enormously appealing aromas of grilled fruit, savory complexities and rich, velvety tannins. Of course, it`s full-bodied and concentrated, with the stuffing to age for up to a couple of decades, and it has a long, licorice-tinged finish. Winemaker Ian Hongell, who joined Torbreck from Peter Lehmann, may not have made this wine, but he deserves a lot of credit for the blending and finishing of this tour de force. -- Joe Czerwinski, March 2018

James Halliday's Australian Wine Companion
Destemmed, open-fermented, 7 days on skins, matured for 30 months in French barriques (50% new) before blending trials determined 2% of viognier be blended in. One of the classic Torbreck wines, with the added benefits of the '15 vintage. It is a gorgeously deep pool of supple, mouthfilling/watering fruit flavours (impossible, I know, but it is). Seduction clinically confronts and comforts the consumer. Black fruits, licorice and a shaft of dark chocolate, plus oak, do the business.

James Suckling
A great RunRig that has unapologetic richness and ripeness with a very fragrant viognier kick on the nose, which adds perfume to the aromas of blackberries, blood plums and tarry notes. The palate sweeps in big waves of fleshy fruit, carrying an impressive core of spice-wrapped sweet black fruits, The ribbon-like tannins deliver length in a smoothly charming mode. Drink or hold.